In my previous post I covered my “Classic” Mac OS emulator set up. One of my goals of getting the emulator set up was to be able to look at and analyze viruses that affected older versions of Mac OS. I think taking a look at old viruses is interesting for two reasons. First, it provides a good overview of 68k assembly. Second, it provides an interesting perspective on the history of malicious software. The first virus I decided to look at is called INIT 29.

The Disinfectant 3.7.1 help file has a good short description of the virus:

An application infected with the INIT 29 virus can be easily identified using ResEdit. See an example in the screenshot below: 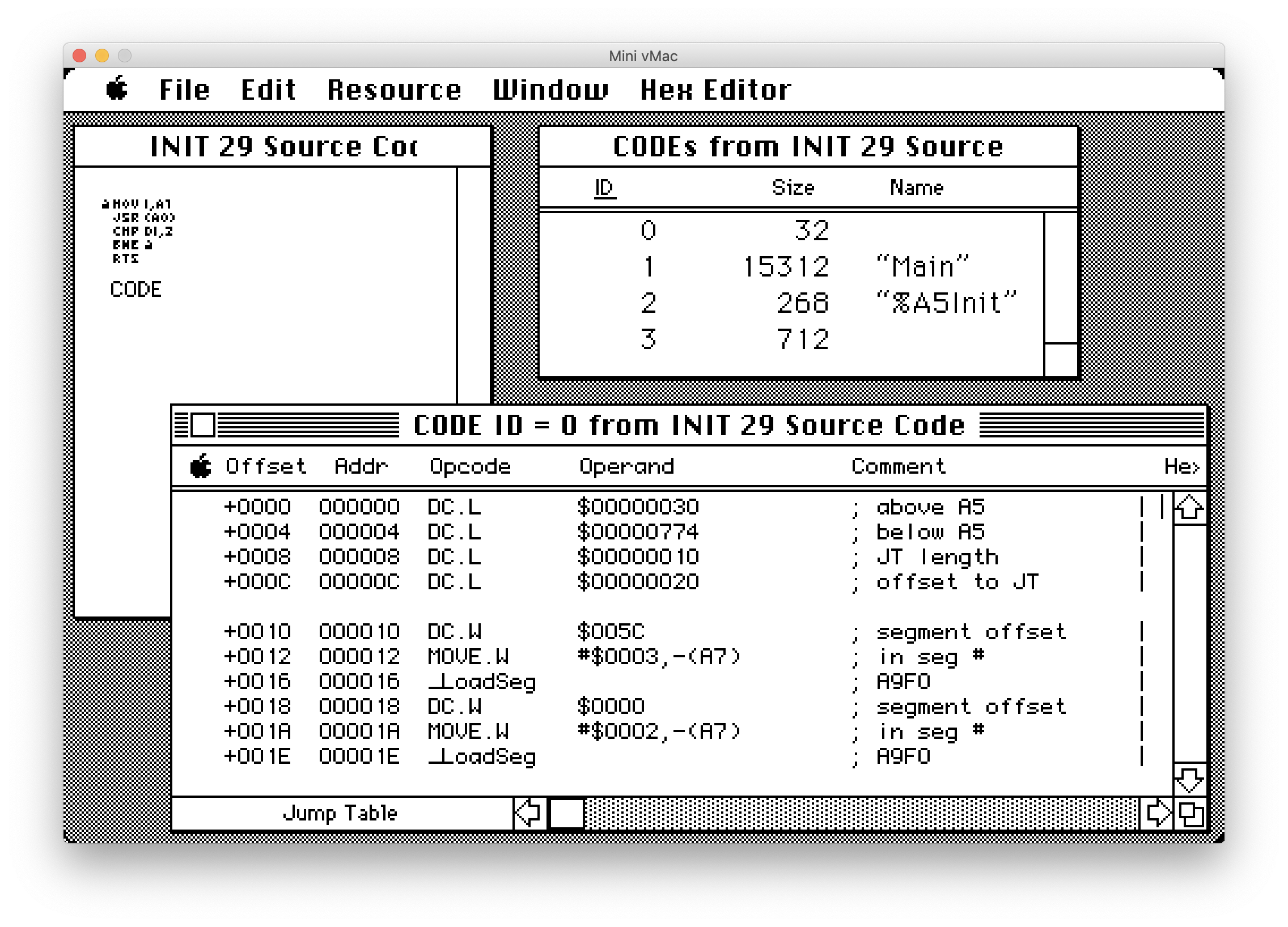 The image below shows a section of the virus code. You can see how it has saved the original jump table entry to the CODE resource with ID 1. 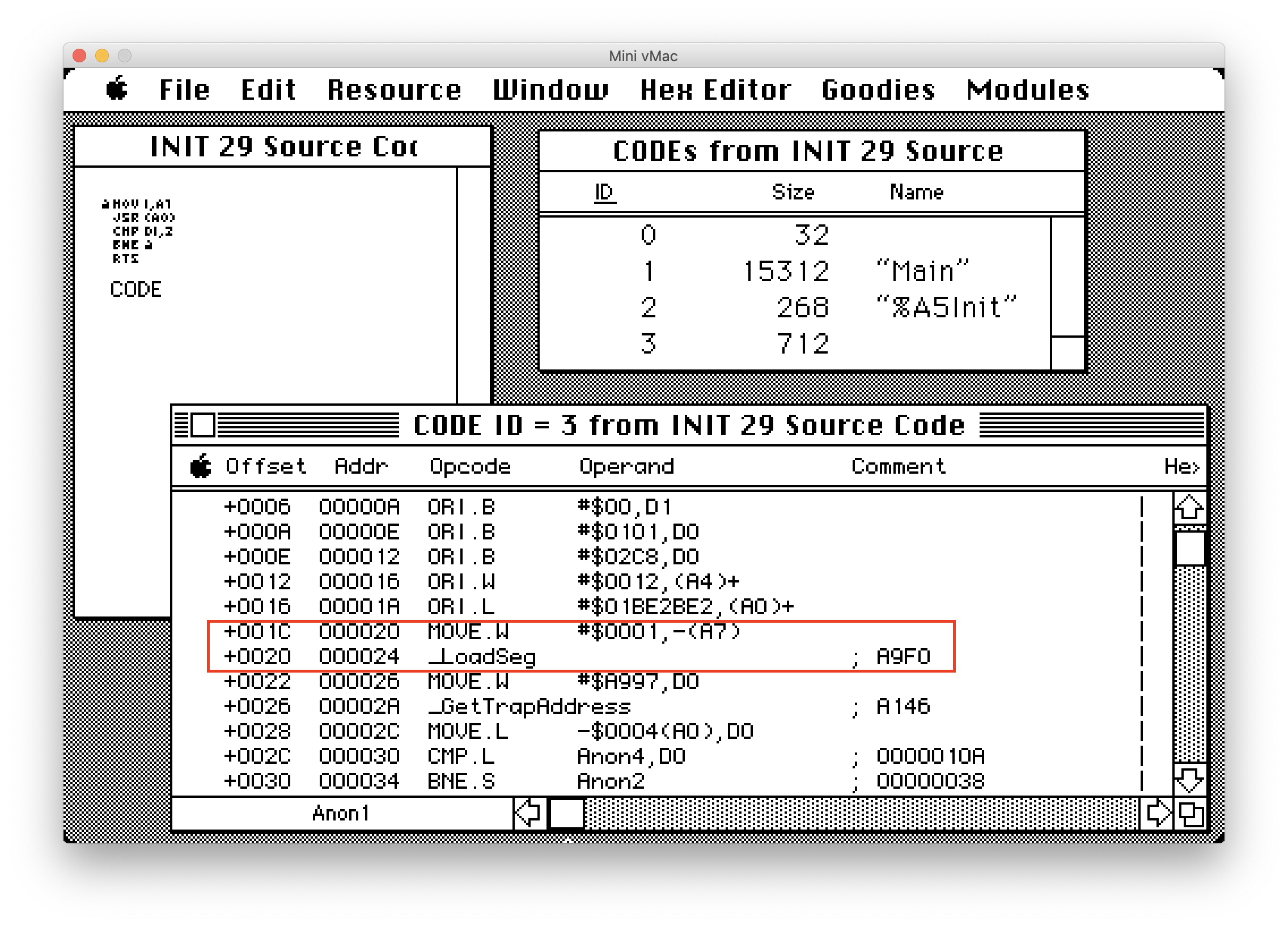 When an infected application is run it will call UseResFile passing in a refNum value of zero. This will retrieve the System resource file. It will then create a new entry in the INIT resource section with an ID of 29. This is where the name of the virus comes from. The virus copies all 712 bytes of itself into this INIT resource. This code will then be executed when the system starts up next.

An infected System file is also easy to identify using ResEdit. We can run an infected application in our emulator and then use ResEdit to compare the system file before and after detonation. 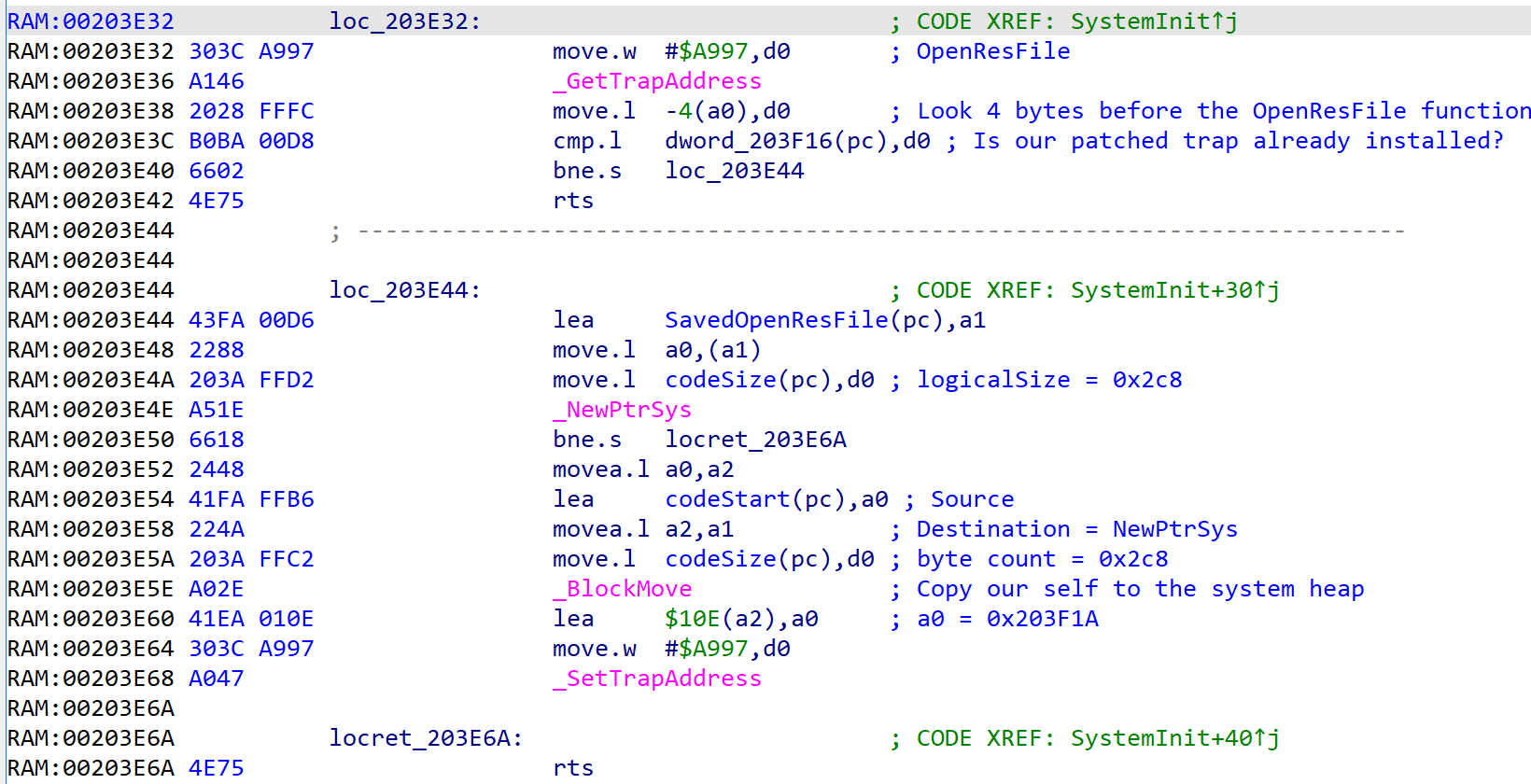 The INIT code is fairly short. It calls GetTrapAddress passing in $A997 to get the address of the current OpenResFile function. It checks to see if it’s already been patched and if it hasn’t it will save a pointer to the original function. Then it allocates 712 bytes on the system heap and makes a copy of itself there. Finally it calls SetTrapAddress to install itself as the new OpenResFile function.

OpenResFile is an important system API. Any time the Finder has to open a file or run an executable it will make use of OpenResFile to find out information about the file. Since it’s used so often it makes a great hook point for the virus to infect other files. The hijacked version of OpenResFile first calls into the original operating system version of the function. This will load the resource file and set it as the current resource. The virus then looks to see if the file has any CODE resources or not. If the file doesn’t have any CODE resources then the virus creates an INIT resource with ID 29 and copies it’s 712 bytes into it. This results in document files that contain the virus code but can’t infect anything else. If the opened resource does have a CODE resource then the virus attempts to find a free ID to use. It will use the lowest free ID to create a new resource entry and copy it’s 712 bytes into it. After that it opens the CODE resource with ID 0 and patches the jump table to point to the new resource that it just created. This results in the application running the virus code the next time it starts attempting to infect the System file.

With the INIT 29 virus attempting to infect every single resource file opened it’s easy to see why the Disinfectant help file called the virus “extremely virulent”. For the most part the virus is harmless and simply infects files. However, since it does hijack the startup of applications it is possible to notice a slow down when launching programs. It’s especially interesting to see just how much the virus accomplishes using only 712 bytes of code.